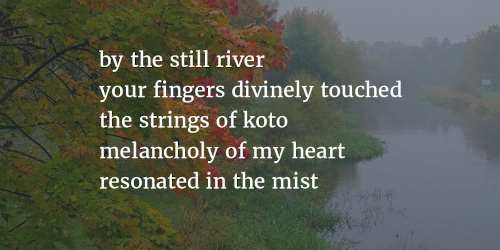 As a poet, I primarily practice tanka, a Japanese form of short poetry. In addition, I also write haiku and cherita.

A haiku, usually written in three lines or a single line, captures a specific moment. On the other hand, a tanka, usually written in five lines, tends to ponder over a moment or event, or juxtaposes contrasting images. This, however, is an utterly simplified definition; volumes have been written to discuss the art of haiku and tanka. A cherita tells a story in six lines divided into three stanzas.

My poems are published in several journals, such as:

Many of my poems can be found in Twitter.