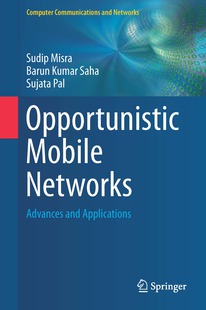 Opportunistic Mobile Networks: Advances and Applications is published by Springer. This book, #TheOMNBook, if you may say, presents a thoughtful assimilation of the recent advances in OMNs across several dimensions, such as routing, cooperation, heterogeneity, emotions, and more. It focuses on some of the fundamental challenges in OMNs, and guides you toward addressing such issues. #TheOMNBook also reflects on different real-life aspects and standards, such as Requests For Comments (RFCs) and patents. The chapters have been crafted in a way so that both beginners as well as seasoned researchers would find them useful. A dedicated chapter on network simulation is aimed to help you develop and test protocols with confidence. Additionally, the book also focuses on a few contextual topics in closely related domains, wherever relevant. Our hope herein is that #TheOMNBook would not only help you gain clear understanding of the key concepts, but also establish you on a firm ground to further extend the contemporary state-of-the-art in OMNs.

What makes #TheOMNBook so special?

In Opportunistic Mobile Networks: Advances and Applications, you will learn how to:

An excellent resource for both students and researchers interested in mobile opportunistic networking. A well balanced mix of theoretical and practical aspects.

I've been working on opportunistic networking since a friend was caught up in a disaster zone after a tsunami and couldn't use his smart phone, as the net was down, yet there were many devices around the town which had wireless and could store, carry, and forward messages, but no protocols to implement this useful service. This book covers in clear and up-to-date style, the principles and practice of the main communications mechanisms to date, and offers helpful exercises and useful information on how to implement these systems in practice.

… this book does a good job to bring together several dimensions of OMNs at a single place.

#TheOMNBook consists of 10 chapters, and is co-authored by Sudip Misra and Sujata Pal. An overview of the chapters is as follows.